Ear Protection for Shooting Range: Why You Really Need It

Ear Protection for Shooting Range: Why You Really Need It

Prolonged hearing damage is the price you pay as an avid shooter if you choose to dodge ear protection for shooting. Firing off some rounds at an indoor range can play a number on your eardrums.

Why Do You Need Ear Protection for a Shooting Range?

But can a gun really make you go deaf? Since you are exposing yourself to sounds up to 140-170 decibels when you shoot a firearm, given that 85 decibels are the maximum safe sound exposure level, you can easily deduce that not wearing ear protection for shooting can result in serious hearing loss.

Imagine that your ear is used to normal speech, which reaches around 60 decibels, and busy traffic, which can go up to 80 decibels, and suddenly you expose it to a  gunshot that produces twice as much noise, not to mention that it is very close to your ears. If someone tells you that they “got used to it”, what they actually mean is that they lost their hearing, so they do not hear the sounds as loud as they are in reality.

Noise-induced hearing loss can occur if you shoot a gun without ear protection since it is the result of frequent exposure to loud sounds over a prolonged period. Experts advise avoiding noise sources that are too loud, too close to our ears or loud sounds that last too long. And since range shooting is a constant source of loud, close sounds, wearing hearing protection becomes mandatory.

What Happens if a Gun Goes Off Next to Your Ear?

Practising safe firearm habits is important, and that includes, of course, aspects related to protecting your hearing health, so a gun going off next to your ear is not a great idea in terms of safety when shooting a gun.

By producing a loud burst of sound, a gunshot can rattle your eardrum, the cochlea, and the bones in the inner ear, causing ear ringing and the sensation that the ear canal is blocked. You might hear about this effect called a temporary threshold shift, which basically means that your hearing will be impaired for a while after a gun goes off next to your ear if you are not wearing hearing protection.

Can You Fire a Gun without Ear Protection?

A gun going off next to your ear can even cause long term hearing loss and tinnitus. Experts can identify a person that has range shooting as a hobby just by analysing their ears. If they have the “shooter’s ear”, a hearing loss pattern, it is clear that they frequently hold a gun up to one ear or another.

Symptoms of Shooting a Gun Without Ear protection can vary, from temporary hearing damage, hearing loss and ear pain, to tinnitus and permanent loss of hearing.

When it comes to range shooting, gunfire happens indoors, at a rapid and continuous pace, which means that the loud sounds are usually more concentrated, so it is not advisable to practice this sport without a pair of earmuffs, combined with foam earplugs.

Noises When Using A Shooting Range

Can You Shoot a 9mm without Ear Protection?

You might wonder if wearing ear protection is mandatory for various types of guns, such as small calibre pistols. The truth is that even a 9mm can reach a noise level of 160 decibels, which is way past the safe sound exposure level of 85 decibels. Since any sound above 85 decibels can cause hearing damage, you need hearing protection when firing a weapon, regardless of the gun’s calibre or type.

How Loud is a Gun with Ear Protection?

Without ear protection, you can expect a 22-calibre rifle to generate a noise level of around 145 decibels, while higher calibre guns, such as a 44-handgun revolver can reach a whopping 170 decibels!

As a rule of thumb, earplugs and muffs that are designed for shooting should bring the noise level below 140 decibels. The levels may vary based on the shooting scene, since firing a gun indoors, in a shooting range will certainly be louder and have a greater impact on your hearing, even with ear protection, because there are no objects to absorb or reflect the sound.

What Ear Protection is Best for Shooting?

When searching for the best ear protection for shooting, you should look for features such as noise cancellation level and efficacy, noise reduction rating, and comfort, as well as add on features, such as Bluetooth or music streaming.

There are various options of ear protection for the shooting range, such as earplugs, hearing bands, also known as canal caps, electronic headsets or noise-cancelling headsets and muffs.

If you choose electronic hearing protectors, make sure you choose a model with longer battery life. Some noise-cancelling electronic earmuffs offer up to 600 hours of uninterrupted usage without charging.

Apart from the modern features and noise-cancellation levels, the best ear protection for shooting is the one you feel more comfortable with, since range shooting requires a high level of concentration, and uncomfortable ear protection is a major distraction.

Are Earplugs or Earmuffs Better for Shooting?

You could, of course, use ordinary foam plugs, but pairing them with a pair of ear protection muffs will give you the best protection for shooting.

Can Noise-cancelling Headphones Be Used for Shooting?

What you should look for when buying ear protection for a shooting range?

The best thing you can do is look for the highest NRR ear protection that you can find. The Noise Reduction Rating or NRR is a convention used to evaluate a product’s performance when it comes to protecting your hearing. Basically, the higher the NRR, the better it is for your ears when you shoot a gun. Since acoustic energy doubles every 3 decibels, you will get 200% more protection from a 29 NRR ear protection product, compared to a pair of earmuffs that feature a 23 NRR.

What happens if you don't wear ear protection?

A lot of shooters suffer from hearing issues because they do not use proper hearing protection while shooting. Especially if they are firing a gun where sound reverberates or echo off walls and other structures then it can prove to be extremely dangerous. If you do not use proper hearing protection when shooting firearms they can suffer a severe hearing loss with even just one shot.

If you have added a muzzle or any other modification to your firearm that will also amplify the sound and make it louder which can damage your hearing so it is important to use proper hearing protection devices (HPD) such as earplugs, earmuffs, earbuds or headphones.

Can you use noise Cancelling headphones for shooting?

Yes, you can! Your hearing will get damaged if you are exposed to sound higher than 140 dB and almost all firearms are more than 140dB, some are even as high as 175 dB which is why it is extremely important to use some kind of hearing protection while shooting. Ideally, you should be using earplugs or earmuff however noise-cancelling headphones can also do the job.

These headphones pick up low-frequency noise and neutralise it before it reaches the ear. Hearing protection is not just important for the shooter but also for the bystanders so they must be wearing some kind of hearing protection as well.

How loud is a gunshot with a silencer?

Many people use a silencer to avoid the loud sound that is produced when a gun is fired. However, a silencer does not completely eliminate the sound instead it only suppresses it. A typical gunshot usually produces 160dB sound and when a silencer is used, the sound is only suppressed by 30dB meaning you would still be able to hear 130dB which is still quite loud since the tolerable sound level for the human ears is 70dB.

And prolonged exposure to any sound above 85dB can result in hearing problems such as tinnitus or hearing loss. This is why it is recommended to use hearing protection whenever you are using any kind of firearm.

What is a good trap score?

Trapshooting is a form of clay target shooting. It is one of the three disciplines of Clay Pigeon Shooting. The shooter has to shoot at a target It is a game of movement and requires accuracy and skill. 19 is a good trap score with a field gun for beginners considering most beginners do not get past the score of 15.

However, for average shooters, 25 is a good score. The game requires the shooters to wear protective eyeglasses as well as hearing protection to protect the ears from the loud sound produced by the guns used for the shooting.

What does Clay Pigeon mean?

A clay pigeon is a target used in skeet or trapshooting. Clay pigeon shooting is a sport in which a shooter shoots a flying target called clay pigeons. It is called Clay Pigeon because in earlier days people used to shoot at live pigeons but later it was declared illegal and clay targets were introduced.

This target is flung in the air and the shooter takes aim and shoots down the target. If the target is hit it is called a “kill” and if it is missed it is called a “bird away”. This sport is quite exciting but shooters need to be careful and protect their eyes and ears with relevant devices.

Can I use a pump-action shotgun for trap shooting?

Yes, you can. Trapshooting is mostly done with a 12 gauge shotgun. Firearms of 16, 20, 28 gauge can also be used. General-purpose shotguns and more specialized target-type shotguns can be used and they can be double barrelled or single barrelled. However, pump-action shotguns are becoming more popular now as they are more reliable and easier to clean than a semi-auto gun.

It is called a pump-action shotgun because you have to pump the fore-end to reload this gun this requires a lot of force. Some people are not able to pump it with the required force which results in the gun not getting loaded. 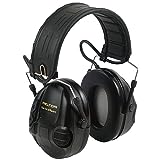 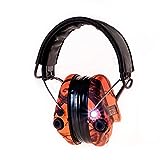 Selection of Level-Dependent Hearing Protectors for Use in An Indoor Shooting Range , article, "www.mdpi.com", retrieved on, Fri 20-November-2020