What Are Decibels, And How Are They Measured?

Which are the best Earplugs for Measuring Decibels?

However, this will depend on several things. If you use them a lot, for example, if it is your principal job, or perhaps just minor use. Also, if you want to use these ear plugs for other things

There are earplug options available, for example: Convenient Fitting, Noise Reduction Rating (NRR), Long-Lasting, Flexibility. As you can see, there is a lot in picking the best fit.

What are decibels, and how are they measured? Decibel scale, measurement units & sound intensity

The human ear is an incredibly flexible hearing device. It has a smart built-in mechanism that reduces its own sensitivity as the sound level goes up and it also has the extraordinary ability to handle a vast range of sound power levels. It can hear the sound of a coin dropping close-by as well as the booming of a jet engine miles away.
Decibels

What is a decibel?

The decibel (symbol: dB) is a relative unit of measurement equivalent to one-tenth of a bel (B). It is used to exhibit the ratio of one value of a power or root-power quantity to another on a logarithmic scale. A logarithmic quantity in decibels is called a level. Two signals whose levels vary by one decibel have a power ratio of 101/10. Zero decibels (0 dB) is the lowest sound audible to a healthy human ear. From there, every increment of 3 dB means doubling of sound power or acoustic intensity.

Decibel’s definition originates from the readings of power in telephony of the beginning of the 20th century in the Bell System in the United States of America. One decibel is one-tenth (deci-) of one bel, named as a tribute to Alexander Graham Bell; however, the bel is rarely used. Today, the decibel is used for a wide spectrum of measurements in science and engineering, particularly in acoustics, electronics, and control theory. In electronics, the gains of amplifiers, attenuation of signals, and signal-to-noise ratios are usually measured in decibels.

The relative loudness that we perceive isn’t something that can be objectively measured; it depends on the individual. Most of us identify a particular sound to be two times as loud as another one when they are about 10 dB apart; for example, you will find a 60-dB air conditioner twice as loud as a 50-dB refrigerator. Yet that 10-dB variation is actually a ten times increase in intensity. A 70-dB dishwasher will sound approximately four times as loud as the 50-dB refrigerator, when it comes to acoustic intensity, the sound it makes is 100 times as strong.

The possibility for a sound to damage hearing is proportional to its intensity, not its loudness. That's why it's delusive to rely on our subjective perception of loudness as a sign of the risk to our hearing.

Noises For A Decibel Meter

Here are some linear and non-linear sound levels in our circumambience :

The phon is a non-regular noise unit that is intended to reflect perceived loudness, and is based on psychoacoustic tests in which volunteers were asked to adjust the decibel level of a baseline tone of 1 kHz until it was the equal loudness as the signal being measured. So for instance, if a sound is 70 phons, that means it sounds as loud as a 70-dB, 1-kHz tone. The dBA scale is now largely used rather than phons.

The sone is a more intuitive measure of loudness, because a doubling in the number of sones equals a doubling in loudness that you perceive(unlike the logarithmic phon scale). Noise levels of household fans are usually measured in sones.

Measuring noise levels relating to loud noise at work are usually given in dB(A) or dB(C) - those frequency weightings are applied to the decibel measurements (A and C frequency weightings), actually they are decibel scale readings that try to replicate the sensitivity of the human ear to various sound frequencies.

In order to have the most use of the reported sound value, you need to take all of the mentioned factors in account, and state the conditions in which the reading was taken.

We hope that we managed to clarify some of the terms that you’ve been confused about or unfamiliar with.The Decibel scale is one of the most important accomplishments when it comes to sound science, and will undoubtedly be in use for decades to come.

What is the scale of decibels?

The human ear can pick up sounds that vary in volume from the sound of a sigh to those that are louder than a furious music festival. The decibel scale begins with zero decibels (0 dB). Someone with such a decent hearing could scarcely detect a sound at that rate. So, describing sound frequencies substantively in more understandable quantities, a logarithmic scale uses 10 as a basis instead of a linear one. This measure is called the decibel scale.

The decibel scale is logarithmic to exploit the wide variety of sounds that people can hear. On such a scale, numbers that reflect a measure or quantity are not uniformly distributed. Instead, they are increasing by multiples of a particular number. That number is 10 for the decibel scale.

What is the 3dB rule?

The 3dB rule is "Every 3dB change represents a doubling or halving of sound energy."

While the human ear can differentiate between one or two pins falling, it cannot differentiate between 10,000,000,000 pins and 10,000,000,000 pins or even 10,100,000,000,000 pins since it is not a linear unit. Conversely, the important multiplication of the power of the sound can be distinguished. If you double this sound, this is equal to an increase of 3dB (decibels) using a logarithmic scale. In the sense of function, this implies that a slight increase in the number of decibels can lead to a significant improvement in the sound level, therefore, it has the ability to damage your ears. 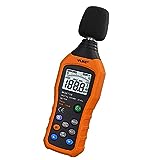 The Journal of the Acoustical Society of America , article, "asa.scitation.org", retrieved on, Tue 01-December-2020

On the Validity of the Loudness Scale , article, "asa.scitation.org", retrieved on, Tue 01-December-2020